A modern way to achieve speed and reliability.

For mainframe shops that need to move data on or off the mainframe, whether to the cloud or to an alternative
on-premises destination, FICON, the IBM mainstay for decades, is generally seen as the standard, and with
good reason. When it was first introduced in 1998 it was a big step up from its predecessor ESCON that had
been around since the early 1990s. Comparing the two was like comparing a firehose to a kitchen faucet.

FICON is fast, in part, because it runs over Fibre Channel in an IBM proprietary form defined by ANSI FC-SB-3
Single-Byte Command Code Sets-3 Mapping Protocol for Fibre Channel (FC) protocol. In that schema it is a FC
layer 4 protocol. As a mainframe protocol it is used on IBM Systems Z to handle both DASD and tape I/O. It is also
supported by other vendors of disk and tape storage and switches designed for the IBM mainframe environment.

Over time, IBM has increased speeds and added features such as High Performance FICON, without significantly
enhancing the disk and tape protocols that traverse over it; meaning these limitations on data movement
remain. For this reason, the popularity and a long-history of FICON does not make it the answer for every data
movement challenge.

STUCK IN THE PAST

One challenge, of particular concern today, is that mainframe secondary storage is still being written to tape
via tape protocols, whether it is real physical tape or virtual tape emulating actual tape. With tape as a central
technology, it implies dealing with tape mount protocols and tape management software to maintain where
datasets reside on those miles of Mylar. The serial nature of tape and limitations of the original hardware
required large datasets to often span multiple tape images.

Though virtual tapes written to disk improved the speed of writes and recalls, the underlying protocol is still
constrained by tape’s serialized protocols. This implies waiting for tape mounts and waiting for I/O cycles to
complete before next data can be written. When reading back, the system must traverse through the tape
image to find the specific dataset requested. In short, while traditional tape may have its virtues, speed – the
21st century speed of modern storage – is not among them. Even though tape and virtual tape is attached via
FICON, the process of writing and recalling data relies on the underlying tape protocol for moving data, thus
making FICON attached less-than-ideal for many modern use cases.

But there is an alternative that doesn’t rely on tape or emulate tape because it does not have to.
Instead, software generates multiple streams of data from a source and pushes data over IBM Open Systems
Adapter (OSA) cards using TCP/IP in an efficient and secure manner to an object storage device, either on
premise or in the cloud. The Open Systems Adapter functions as a network controller that supports many
networking transport protocols, making it a powerful helper for this efficient approach to data movement.
Importantly, as an open standard, OSA is developing faster than FICON. For example, with the IBM z15 there
is already a 25GbE OSA-Express7S card, while FICON is still at 16Gb with the FICON Express16 card.
While there is a belief common among many mainframe professionals that OSA cards are “not as good as
FICON,” that is simply not true when the necessary steps are taken to optimize OSA throughput.

To achieve better overall performance, the data is captured well before tape handling, thus avoiding the overhead
of tape management, tape mounts, etc. Rather than relying on serialized data movement, this approach breaks
apart large datasets and sends them across the wire in simultaneous chunks, while also pushing multiple
datasets at a time. Data can be compressed prior to leaving the mainframe and beginning its journey, reducing
the amount of data that would otherwise be written. Dataset recalls and restores are also compressed and use
multiple streams to ensure quick recovery of data from the cloud.

The ability to write multiple streams further increases throughput and reduces latency issues. In addition,
compression on the mainframe side dramatically reduces the amount of data sent over the wire. If software is
also designed to run on zIIP engines within the mainframe, data discovery and movement as well backup and
recovery workloads will consume less billable MIPS and TCP/IP cycles also benefit.

This approach delivers mainframe data to cloud storage, including all dataset types and historical data, in a quick
and efficient manner. And this approach can also transform mainframe data into standard open formats that
can be ingested by BI and Analytics off of the mainframe itself, with a key difference. When data transformation
occurs on the cloud side, no mainframe MIPS are used to transform the data. This allows for the quick and easy
movement of complete datasets, tables, image copies, etc. to the cloud, then makes all data available to open
applications by transforming the data on the object store.

A modern, software-based approach to data movement means there is no longer a need to go to your mainframe
team to update the complex ETL process on the mainframe side.

To address the problem of hard-to-move mainframe data, this software-based approach provides the ability to
readily move mainframe data and, if desired, readily transform it to common open formats. This data transformation
is accomplished on the cloud side, after data movement is complete, which means no mainframe resources are
required to transform the data.

Dedicated software quickly discovers (or rediscovers) all data on the mainframe. Even with no prior documentation
or insights, Model9 can rapidly assemble and map the data to be moved, expediting both modernization
planning and data movement. 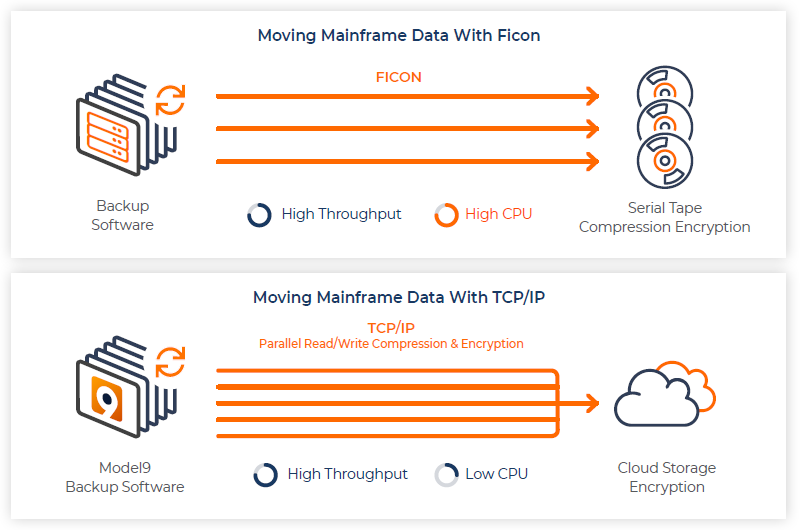 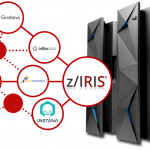 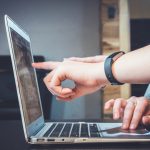 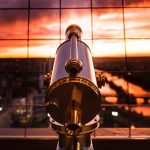